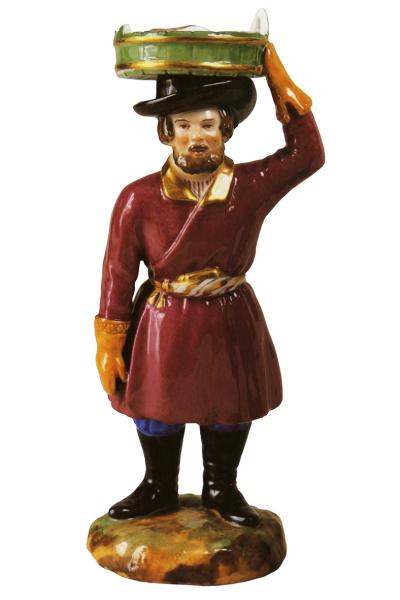 The porcelain sculptures occupied a significant place in the production of the Kornilov brothers’ porcelain factory. Following the Imperial Porcelain Factory in the mid-1840s, the factory's products were replenished with images of genre scenes from the lives of city merchants and artisans.

The enterprise began to produce typical figurines of street vendors and pedlars, craftsmen, famous actors. Popular at that time lithographs of famous artists were the source for the genre miniatures and statuettes. In 1851, the Cabinet of His Imperial Majesty purchased seven "porcelain dolls" for His Highness Prince Saxe-Weimar in the factory shop. Among them was a fish seller. The figure was sculpted after the lithograph by the same name, made by K. Kolman.

Karl Kolman (1786-1847) is a watercolour painter, a native of Augsburg, who received an initial art education at the Munich Academy of Arts, and then at the Imperial Academy of Arts in Russia. The artist, possessing the gift of observation, studied the life of Russian people with interest, embodying it in his watercolours and lithographs.