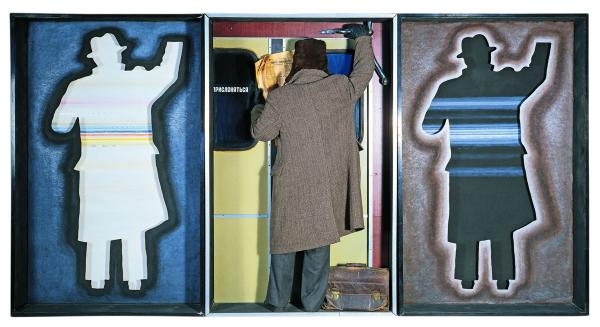 Triptych No 14. Self-Portrait. (Dedicated to My Father)

The central panel of Jankilevskij's object contains a lifesize sculpture of a man in a subway. On the side panels the figure is repeated in the form of a silhouette, through which we as viewers apparently look, as through a window, at the tracks or a train racing past.

The work toys with various levels of reality, the realistic scene in the middle counterpointed by the two flanking panels, which immediately quash any incipient sense of an illusion of reahty. Apart from being experiments in form, the artist's works are conceived as metaphors for the contemporary world, alluding to the mass culture and anonymity characteristic of the modern big city. Jankilevskij's paintings are generally very personal: "When I touch the paper or canvas", he says, "it's as if I were touching my soul in my imagination". Though the title may suggest it, this is not in actual fact a self- portrait in the conventional sense. Rather, the man reading a newspaper personifies the individual's isolation in the megalopolis.