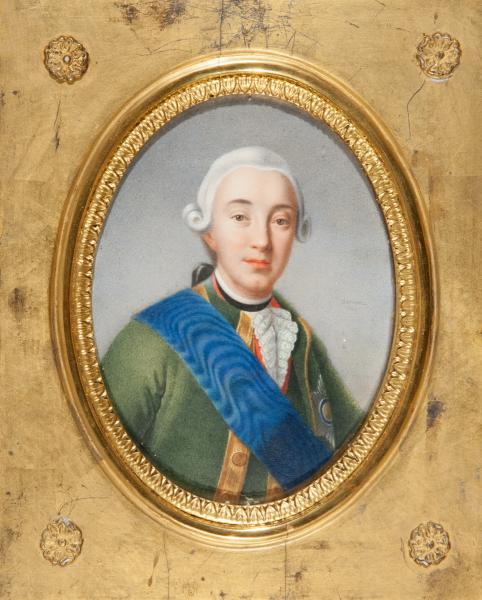 Peter III (1728, Kiel — 1762, Ropsha) was the son of Tsarevna Anna Petrovna and Duke Charles Frederick of Holstein-Gottorp; he was also the grandson of two implacable enemies, Emperor Peter the Great of Russia and King Charles XII of Sweden. He became heir to the Russian throne in 1742 and was Emperor from 25 December 1761 to 28 June 1762, but was never crowned. He imitated Peter the Great in intending to carry out a number of reforms. The Manifesto on the Freedom of the Nobility, the abolition of the Office for Secret Investigation and the secularisation of church lands formed the basis of the legislative measures subsequently taken by Catherine the Great. The view of traditional historiography is that he was ignorant and feeble-minded. He was overthrown by a palace coup instigated by his own wife, the future Catherine the Great, and was soon killed. In the portrait he is shown wearing the uniform of a general of the troops of Holstein, and with the ribbon of the Order of St Andrew the Apostle.