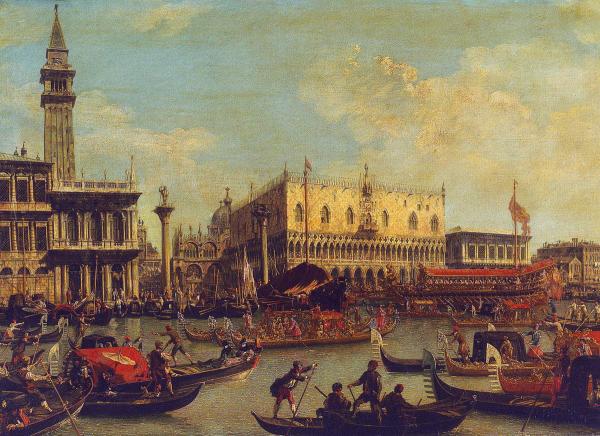 The Marriage of the Doge to Adriatica in Venice

Reduction of Canal’s painting “The Marriage of the Doge to Adriatic Sea” (or “The Return of the Bucentaur to the Molo by the Doge’s Palace”, 1727–1729), exhibited in the Pushkin State Museum of Fine Arts in Moscow. On the ascension day of a new Doge a symbolic ceremony of his marriage to the Adriatic Sea was held. The ceremony of marriage was an ancient sign of naval strength of Venetian Republic. At the quayside of the palace there is a sparkling with gold galley of Bucentaur, a ship of the Doge, who came back from the ceremony of throwing of golden ring off the Lido Island. Gondolas of French embassy, decorated with lilies, accompany Bucentaur.