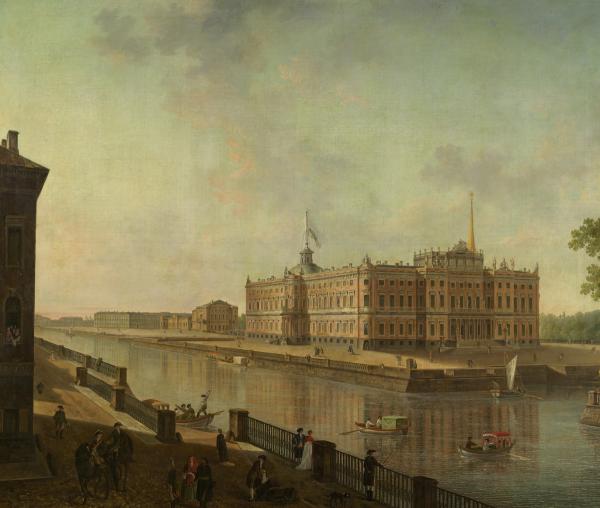 View onto St. Michael’s Castle in Saint Petersburg from the Fontanka Side

The construction of the castle was implemented under the supervision of an architect with Italian origin – Vincenzo Brenna; he designed the original project of the palace and its interiors.

A singular appearance of the castle, combining contradictory architectural tendencies and stylistic means, distinguishes it from the general Russian classicism. Yet it is the castle that is often considered as a symbol of Paul’s epoch. Its image absorbed artistic tastes and distinctness of its owner and main creator – emperor Paul I. The majestic giant – the St. Michael’s Castle, as it was called in documents of the 18th century – overlooked the island, washed by waters of Moyka and Fontanka rivers from north and east. The walls of the palace are adorned with columns of pink and grey marble. Initially marble statues were installed on the roof. From the western side a palace church of Archangel Michael, the patron saint of Romanovs, is located – its spire is the most important element of the whole ensemble.

The painting was created on the order of emperor Paul I for the St. Michael’s Castle.