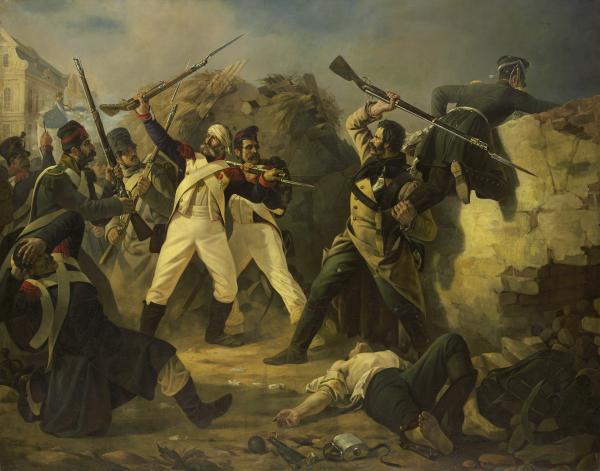 The Heroism of Leonty Korenoi, Grenadier of the Finland Life Gurds Regiment, at the Leipzig in 1813

Leontiy Korennoy took part in the battle of 1812 being in the Finland Life Gurds Regiment, in which there were the best and worthy soldiers. Korennoy fought bravely during the battle of Borodino, but it is for the events of 4th of October 1813, during the “Battle of the Nations” in Leipzig, that he has been the subject of Polidor Babaev’s painting. His battalion of Finland Life Gurds Regiment was massively attacked by the enemy, who outnumbered them, so they began to retreat. Korennoy and some of his fellow grenadiers allow the commanders and the wounded officers to escape. After he received 18 wounds, the enemy captured him as he was the only one left alive. Napoleon, who heard about Korennoy’s heroic actions, met him in person. After that, Napoleon issued a decree, in which he called Korennoy a hero and set him as an example for his French soldiers to follow. When Korennoy was recovered, he was released on Napoleon’s personal orders and was taken home.