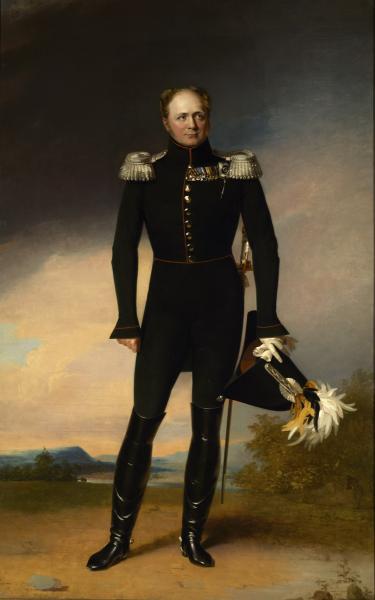 Portrait of Emperor Alexander I

Alexander I (the Blessed; 1777–1825) was the older son of Emperor Paul I and Empress Marie Feodorovna, née the Princess of Württemberg. He was raised by his grandmother, Catherine the Great, in the spirit of the philosophy of the Enlightenment. He ascended to the throne in 1801, after his father was murdered by a group of conspirators. The main aims of his initial domestic policies were granting equal rights for land ownership and abolishing serfdom. In the first years of his reign, he relied on a Secret (or Intimate) Committee, comprised of friends from his youth, associates and supporters of a constitutional mode of government to help him realise these goals. He enacted a series of decrees that began the process of abolishing serfdom. In “Regulations on the Establishment of Educational Institutions” (1803), three new principles were established: classless education, free education at the lower levels and consistency of educational programs. Five universities and three lyceums, including the one in Tsarkoye Selo, were founded. After the Patriotic War of 1812 and the foreign campaign of the Russian army, he had great international authority. At the Congress of Vienna (1814–1815), he initiated the creation of a Holy Alliance of European Monarchs (1815), which he himself headed. He led victorious wars against Persia (1804–1813), Turkey (1806–1812) and Sweden (1808). As a result, Western Georgia (1801), Finland (1809), Bessarabia (1812) and Azerbaijan (1813) were added to the Russian Empire. He is depicted in the uniform of the Life Guards Cavalry Regiment with the following orders: St Andrew (star), Order of the Garter (England) and the Iron Cross (Prussia) and the military order of the Sword (Sweden). On the medal brooch: Cross of the Order of St George, Fourth Class; a medal inscribed with “In memory of the Patriotic War of 1812”, Order of the Iron Cross (Prussia), Military Order of Maria Theresa (Sweden), Military Order of the Sword (Sweden), cross “In Memory of the War of 1813–1814” (Austria) and medal in “In Memory of the War of 1813–1814” (Prussian).