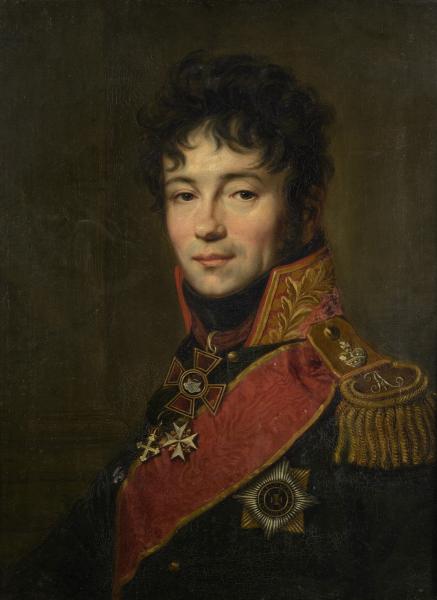 Yevgraf Fedotovich Komarovsky (1769–1843) was a Count, adjutant general, and a general of the Infantry. He was the son of a small court official. He was an ensign in the Izmailovsky Life Guards Regiment (1792). He was adjutant to the Grand Duke Konstantin Pavlovich, with whom he participated in the Italian and Swiss campaigns led by Alexander Suvorov. He was major general (1799), adjutant general (1801), Count of the Holy Roman Empire (1803). He acted as assistant to the St Petersburg military governor (1802), inspector of the Internal Guard (1811), temporary military governor of St Petersburg (1824). In 1828 he was made general of the Infantry and named senator. He left “Notes” (St Petersburg 1914). He appears here in standard general’s uniform, with the monogram of Emperor Alexander I on the epaulettes. Orders: St Vladimir of the 2nd class (5 October 1813, cross on the neck and star; the emblems of the order were approved later), St Anne of the 1st class (16 March 1806, ribbon), Commander’s cross of the Order of St John of Jerusalem (Maltese cross, 29 October 1799), Sardinian cross of St Lazarus and Mauritius of the 3rd class (received before 1802).