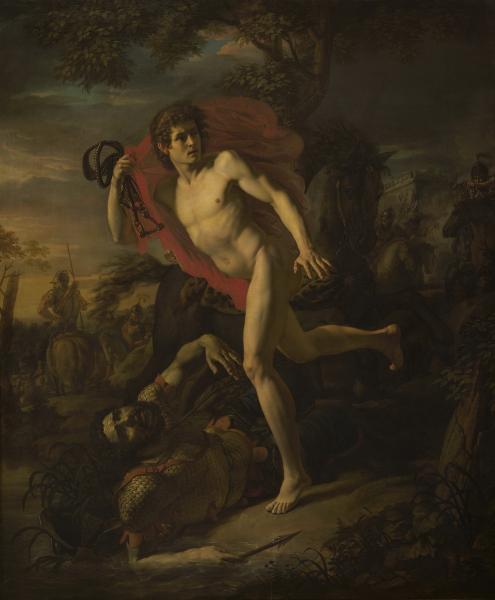 The plot of the painting was taken from one of the heroic episodes of the old chronicles. In 968 when the troops of Prince Sviatoslav were in campaign the Pecheneg nomads besieged Kiev. The main character of the painting is an unknown young Kievan. Speaking Pecheneg language he had passed the enemy’s encampment holding a bridle. When the enemies called for him he answered that he was looking for the gone horse. Having swum the Dnieper he found the Russian troops and brought them to the besieged city.

The main character is rushing through the enemy’s encampment like a whirlwind. Having reached the Dnieper (a narrow strip of water at the bottom of the painting) he listened to the sounds of the chase. The arrow shot after him struck the Pecheneg who fell from a horse and lay dying near on the bank. In the background one can see the riders and outlines of town’s walls. The moment depicted by the artist expresses laconically and purely the idea of the work – nothing is going to stop the man who does his patriotic duty.