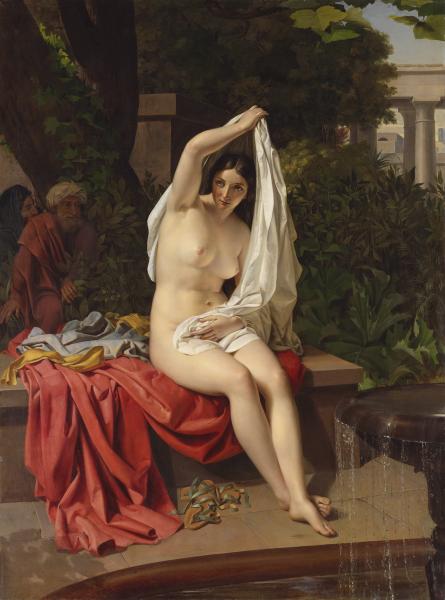 Susanna Caught by the Elders in her Bath

In the artist’s letter to the Council of the Academy  from Rome, dated November 23, 1831, he says: "At the place of my stay I have made a painting representing undressing Susanna in natural size...". After his return from Italy, the artist presented a petition to honour him with the title of academician for the painting performed. The Council decided "to honour the artist Lapchenko with a title of academician and submit for approval to the general meeting of the Academy; his painting, depicting Susanna, to be added to a list of belongings of the Academic Museum". The model V. Caldoni posed for the painting.

Vittoria Caldoni (in Russia – Victoria Antonova Lepchenko) – daughter of a winemaker from Albano, Antonio Caldoni. The last information about her appears in the application filled by G.I. Lepchenko in 1869, where he reports that since 1839 he was married to Victoria, daughter of Antonio Caldoni, as well as in the police permission from 1868 for Gregory Lapchenko to move with his wife Victoria Antonovna to Dinabur, on the back of which there is a mark of the registration in Dinaburg, Vilnius and Saint Petersburg dated 1869, 1870 and 1871.