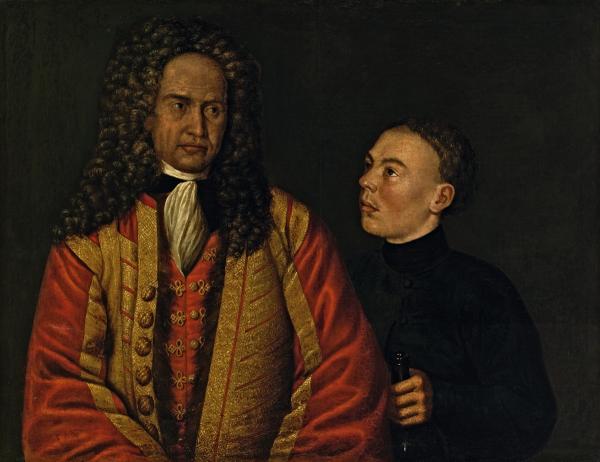 Portrait of Alexei Lenin and a Kalmyk

Alexei Lenin (? –1707). Son of the Moscow nobleman Nikifor Lenin. In 1693 he became a solicitor; as solicitor he participated in the second Azov campaign in 1696. Starting from 1702 he acted as a solicitor working at higher levels. Lenin died in 1707.

For many years the painting did not have any names attached to the subjects. However, according to the Inventory of the Preobrazhensky Palace, there existed a “Picture of Alexei Lenin and a Youth” in the entrance hall. Not until the 1960s was the painting convincingly identified as the double portrait from the Russian Museum collection. Based on existing documentation, it was very recently established that Alexei Lenin was a highly placed solicitor, beginning around 1702, who died in 1707. This places the date of the portrait prior to Alexei’s death in 1707.