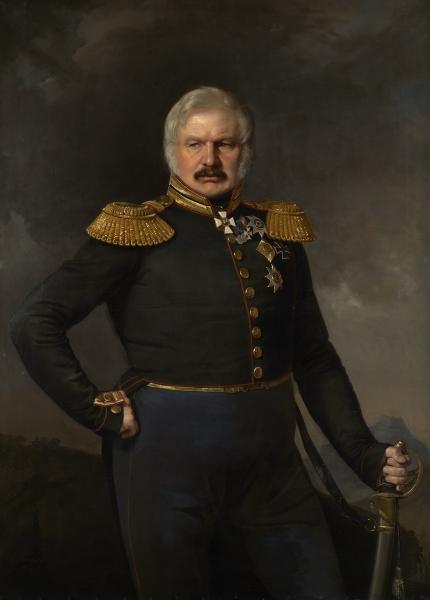 Alexei Petrovich Yermolov (1777–1861) was the son of state councillor Pyotr Yermolov and Maria Denisovna, née Davydova. He was enrolled in the Preobrazhensky Life Guards Regiment as a child. He was educated at home.

Under the reign of Paul I he lived in exile. He took part in the military campaign of 1805-1807. In 1806 he was made a colonel, in 1808 — major general, in 1810 — Commander of an Artillery Guards Brigade, then — Commander of the Infantry Guards Division of the Lithuanian Regiment. In 1812–1814, during the Patriotic War, he was head of the staff of the 1st Army. He excelled at the Battle of Borodino. In 1816 he was named Commander-in-Chief in Georgia where military action was then taking place. Lines of fortification were built from Grozny to Yekaterinodar (now Krasnodar). Yermolov did a great deal for the Caucasus, promoting the development of trade, industry and education. Relying on military and administrative methods, he appeased many Caucasian tribes and annexed Abkhazia and the Khanates of Shirvan and Karabakh. In 1818 he was made general of Infantry. In 1827 he retired. Member of the State Council. In March 1839 “he went on holiday for medical treatment”. Living in Moscow, he was made head of the Moscow militia in 1855. He appears here in general’s uniform of the Horse Artillery Army with Orders of St Andrew the First-Called (star), St George of the 2nd class (cross on the neck and star), St Vladimir of the 1st class (star), the Kulm Cross (Prussia), Military Order of Maria Theresa (Austria). In his buttonhole are the medals “In memory of the Patriotic War of 1812” (silver, on the ribbon of St Andrew) and “For the taking of Paris”.