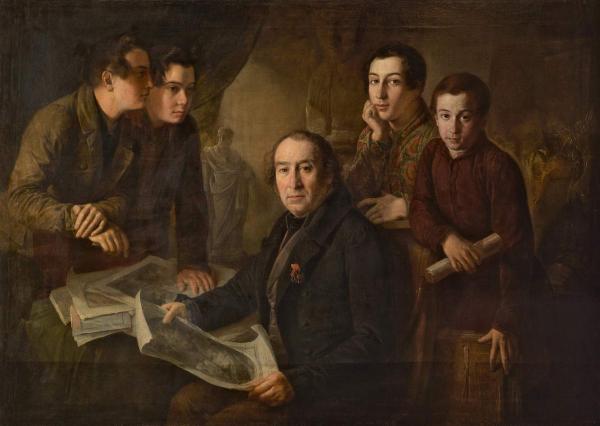 Portrait of Alexander Stupin with Pupils

Alexander Vasilyevich Stupin (1776–1861) was an artist. He began studying with the artist Lopytin in Arzamas in 1787, and then worked as the pupil of a number of masters. He became an independent artist in September 1797, accepting commissions and taking in pupils. As he was thinking of setting up a school in Arzamas, he travelled to St Petersburg where he studied in the Imperial Academy of Art from 1800 to 1802, paying special attention to methods of teaching. In 1801 he received the silver medal of the second rank and on graduation a certificate as Artist of the 14th class. On his return home he began organising the Arzamas School of Painting and opened it in 1805. The Imperial Academy of Art took Stupin’s school under its patronage in 1809, and the artist himself received the title of Academician. The portrait was painted as an academic exercise “To reproduce in natural size a group of four or five people, knee-length, showing Academician Stupin surrounded by pupils and examining the work of one of them”. Alexeyev received the title of Academician for the picture in 1839.