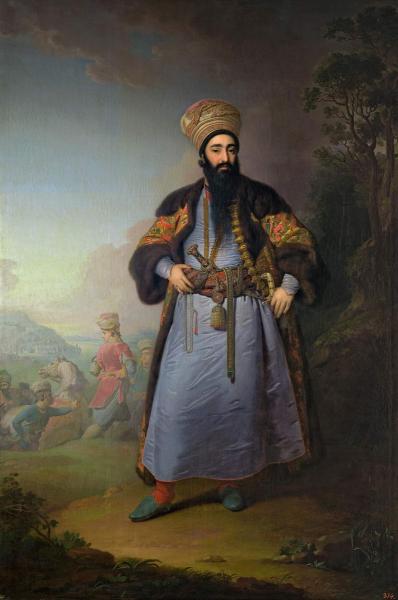 Portrait of Murtaza Kuli, Brother of the Shah of Persia, Āghā Muhammad

Murtaza Kuli (1750–1800) was a prince of the Qajar dynasty of Iran and brother of Āghā Muhammad, who became Shah of Iran in 1795. Defeated during the struggle for the throne, he fled and was received in St. Petersburg under the protection of Catherine the Great. He returned in Persia in 1796, but was forced to return in Russia and settled in Astrakhan. Borovikovsky’s painting, which was a commission from the Empress, depicts Murtaza Kuli in a splendid oriental dress. Murtaza Kuli's clothing is painted with the astonishing illusionism that shows the talent of the artist to convey the material beauty of the world.