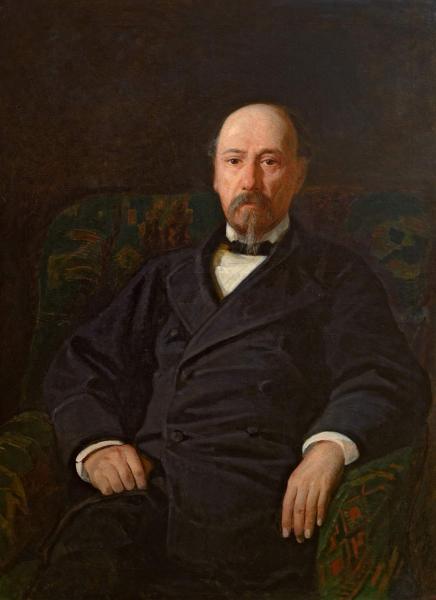 Nikolai Alexeyevich Nekrasov (1821–1877/1878), a poet, prose writer and publicist, was born into the landed gentry. At the age of seventeen he went to St Petersburg to enter university, despite the wishes of his father who wanted his son to follow a military career. Because of this wilfulness his father deprived him of any material support, and so as not to die of hunger Nekrasov undertook coaching and wrote poetry and stories to commissions from the capital’s booksellers, for which he received a pittance. During this period he got to know Vissarion Belinsky, who had a great influence over him, moral, literary and ideological. In 1847 Nekrasov, together with the writer Ivan Panayev, bought the “Sovremennik”, which had been set up by Pushkin. The government stopped the journal from being published for eight months in 1862, and banned it completely in 1866. A year-and-a-half later Nekrasov rented “Otechestvennye zapiski” and was the journal’s editor, along with Saltykov-Shchedrin, from 1868 until his death. The depiction of the harsh life of the peasantry and the urban poor and his sympathy for the difficult lot of women were distinctive features of his work. He said of himself: “I have dedicated my lyre to my people” and he called his muse “the muse of vengeance and sorrow”.