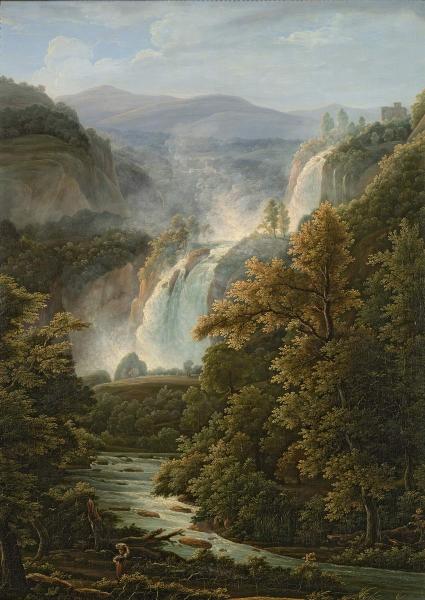 View in Tivoli near Rome

As a student of the Academy of Arts, Fyodor Matveyev went to Roma in 1779 and stayed there forever. Finishing his mastership, Matveyev became one of the most famous European landscapists. Depicting the Italian landscapes, he gave them solemn and magnificent traits.

Glorification of Italian nature was absolutely natural for a young painter, trained by the whole academic education to take lead from Classicism. An exalted and heroic interpretation of landscape subject was combined smoothly with Matveyev's praising of Italian nature, which justified those classicistic concepts of landscape that could seem to be artificial in the faraway Russia.

Tivoli – a town in central Italy in a province Lazio, in 24 km to the north-east of Rome, on the river Teverone. Known since the 4th century BC. Architectural monuments: temple of Vesta (or Sibyl; the 1st–2d centuries AD) villa Maecenas (the 1st century AD), and Villa d'Este (1549) with a park and a cascade system of waterfalls.