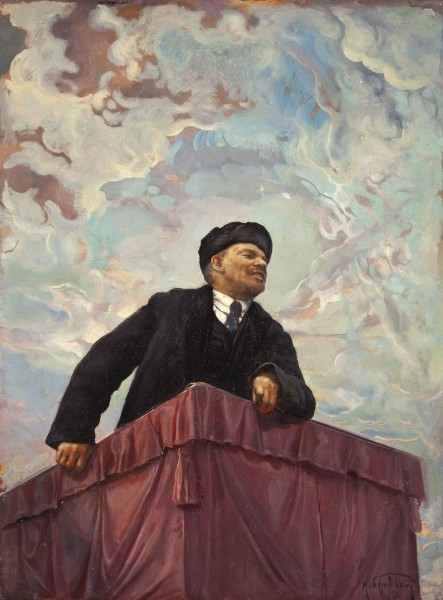 Lenin on the Rostrum

Isaac Brodsky created an extensive gallery of Vladimir Lenin images from both memory and live sketches. The artist witnessed Lenin speaking at meetings in 1918 and painted him at the sessions of the 2nd Comintern Congress in 1920. Many of Brodsky’s Lenin portraits were copied by artists repeatedly and mechanically reproduced millions of times, but this particular painting was regarded as unsuccessful and unknown to the wider public. The figure’s expressive pose seemed overly photographic to contemporaries and its contrast with the large sky mass and stylized cloud patterns unfavourable for the leader’s image, recalling the works of the Symbolists. However, it’s these very “mistakes” by the artist that raise the painting out of the realm of canonical clichés, lending it an ambiguity that’s interesting for modern viewers.