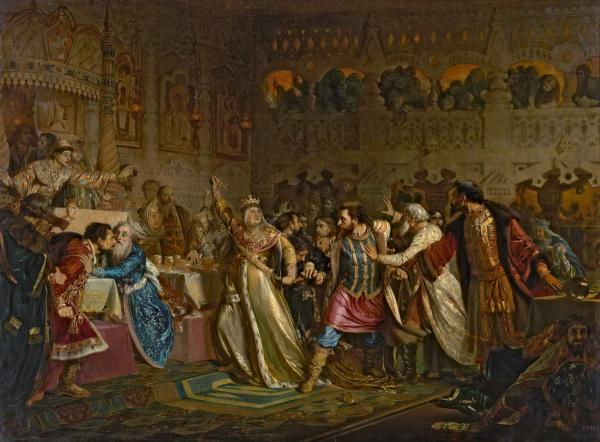 At the wedding of Grand Prince Vassily II Tyomniy in 1433, Grand Princess Sophia Tears Down the Belt That Once Belonged to Dmitry Donskoy

Grand Princess Sophia (1371–1453), wife of the Grand Prince Vasily I of Moscow (the son of Dmitri Donskoy) learnt that at the wedding of her son Vasily II his cousin and namesake Vasily (a son of the Prince Yury of Zvenigorod) came wearing the belt once belonged  to Princes of Moscow and then stolen. Sophia tore down the belt. This event became the starting point of a conflict, during which Vasily was blinded and then named “Kosoy”(The Squint-Eyed). 12 years later, his relatives blinded Vasily II, who was named “Tyomniy”(The Blind).