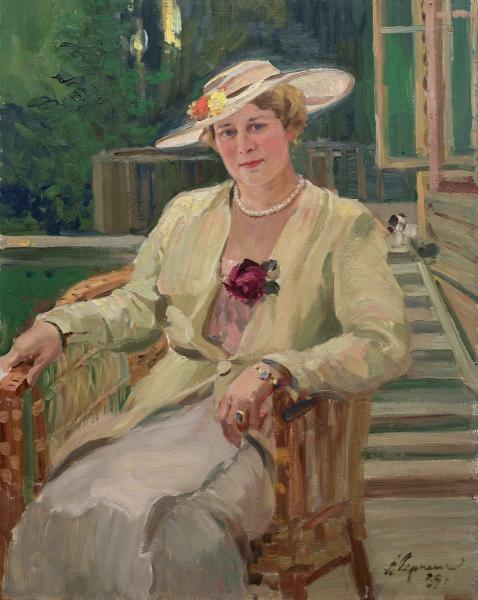 A painter of official pictures and often pompous portraits, Alexander Gerasimov best revealed his professional talent in landscapes, still-lifes and chamber portraits. His image of Alla Tarasova is the embodiment of dignity, naturalness and charm. Noted for her lifelike and naturalistic portrayals, the actress played both lyrical and tragic parts with equal success. When the portrait was painted in 1939, Alla Tarasova had already worked at the Moscow Arts Theatre for fifteen years. Her repertoire included the works of Alexander Ostrovsky, Maxim Gorky, Leo Tolstoy (Anna in Anna Karenina) and Anton Chekhov (Masha in Three Sisters). Tarasova was particularly famed for her performances in such films as The Thunderstorm (after Alexander Ostrovsky) and Peter I (after Alexei Tolstoy). Her image of Kruchinina in Guilty Without Guilt (1946) was for many years the personification of a tragic female fate, maternal repentance and selfless devotion. Alexander Gerasimov’s portrait seems to recall nothing of the dramatic roles played by Alla Tarasova. Her attentive gaze and kindly manner betray her capacity for sympathy. The sitter manages to be handsome, feminine and majestic all at the same time. Her expressive silhouette is depicted in light clothes against the green background of a forest or park. The movement of the brush is free and the painting is filled with sunlight.