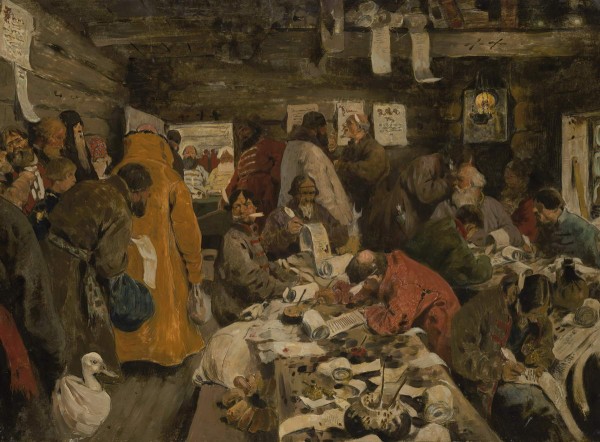 In a Public Office of Muscovite Times

The prikaz, a form of public office that managed various aspects of state life, appeared for the first time in Russia at the end of the 15th century. From then on their number kept on growing and in their entirety they formed an immense bureaucratic apparatus. Quite often the clerks working in a prikaz only received a very small salary and therefore they often “lived off” the offerings brought by visitors, something that helped the growth of bribery and red tape. Sergei Ivanov, who took a critical view of pre-Petrine Russia, has tried to present the viewer with the everyday life of a Muscovite prikaz. The scene that the artist depicts is like an individual frame taken by chance from a motion picture, yet still preserving the dynamism of the film. The viewer can almost hear the buzz of the crowd filling the prikaz. Although the paintwork is like a sketch, we can characterise almost every person psychologically and socially from a pose, a fleeting gesture or the expression on a face.