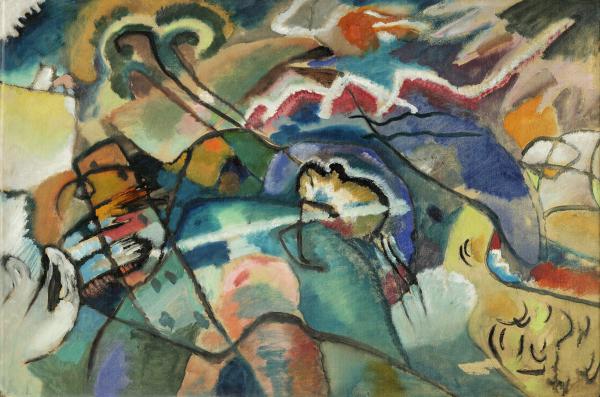 Study for the painting of the same name (Solomon R. Guggenheim Museum, New York, USA; 1913).
Composition with White Border characterises Wassily Kandinsky's early period. The original painting system the artist had created by that time, called abstraction, found in this painting its mature implementation. This painting, like all of Kandinsky's "absolute paintings" of the 1910s, is characterised by its cosmic qualities and its interest in the mystical mystery of the birth and death of worlds. Here, the artist used his favourite motif of "exploding" forms. Amplified by sonorous colour contrasts, arcs and sharp and jagged forms, it imparts to the image a charge of turbulent energy. Like the sounds of music and form freed from the shackles of objectivity, filled with dynamic forms, the intense colouring transmits spiritual impulses: moods, ideas and the artist s revelations. For the artist, the creation of art was act of recording his insights. In this work, Kandinsky s premonition of future world catastrophes is reflected.
«Виртуальный Русский музей» в социальных сетях: