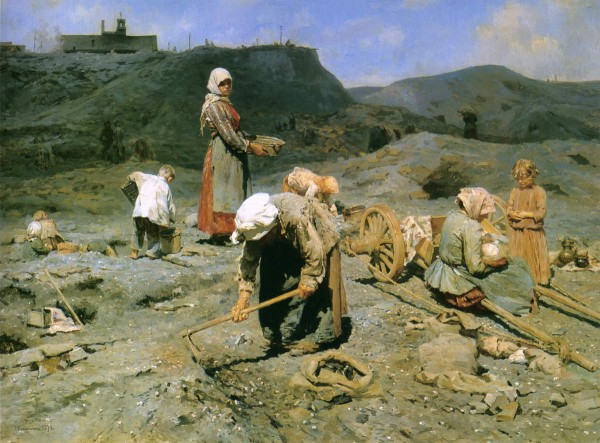 The Poor Gathering Coal in a Worked-Out Mine

Nikolai Kasatkin tells the story of the everyday lives of the women and children of Alexandrovsk-Grushevsky (now Shakhty), the chief commercial centre of the eastern Donets coal basin in southern Russia, describing one of the gloomy paradoxes of the industrial revolution in Russia. While their fathers and husbands are mining for anthracite underground, the women and children attempt to make ends meet by scouring the site of an old mine for scraps of coal. The expressiveness of the depicted scene — resolved as an everyday, repetitive action — is increased by the slag heaps, gaping potholes and lifeless landscape. People rake in the ground as far as the horizon. Kasatkin’s adherence to Critical Realism and modest, dark tones reflects the continued influence of his teacher, Vasily Perov, in the 1890s.