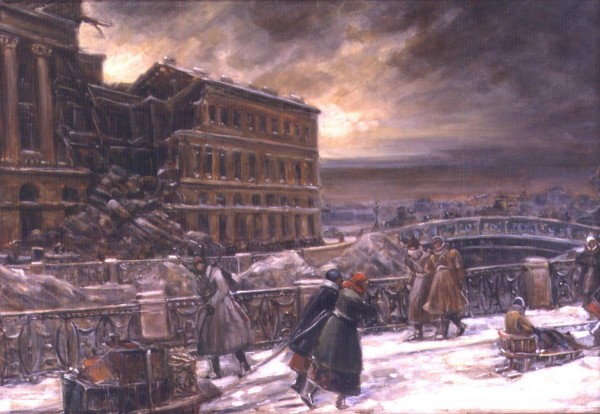 At the Field of Mars

Vasily Kuchumov often painted the facades and interiors of the suburban palaces outside Lenin - grad. During the Second World War, he produced a large series of paintings depicting the first winter of the Siege of Leningrad. The artist portrays the stoical struggle of the city and poignant moments from the lives of the citizens, who courageously withstood all the hardships and privations of the long siege. Kuchumov depicts snow-covered ships, the sky ablaze with the fire of incendiary bombs, frozen streets and embankments, and citizens descending to the River Neva at Senate Square for water. These were the everyday events of the city of Leningrad during the war. These works were first shown a year later at an exhibition of Leningrad artists’ works from 1941 and 1942 held in the city of Perm (then Molotov), where many of Leningrad’s cultural institutions had been evacuated. In 1943 they were included in the major exhibition Second World War in Moscow.