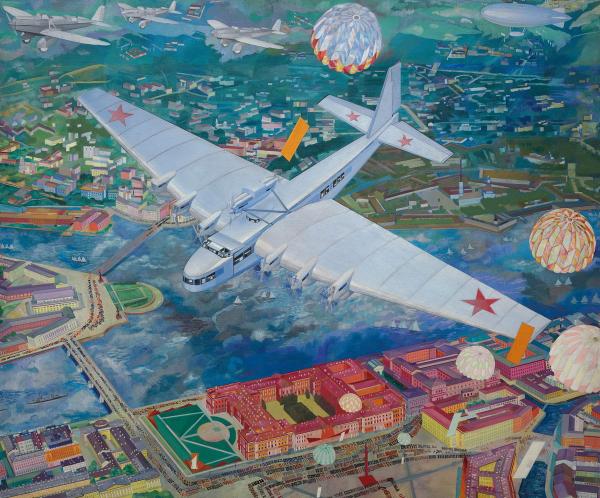 The painting “ANT-20 Maxim Gorky” by Vasily Kuptsov is the most significant work among the few ones that have been preserved. On a surge of  general interest to the aviation, parachuting, aircraft modelling in 1920s-30s the artist suggested that the theme of aviation was one of the most important in art and dealt with the flight theme repeatedly. The work was painted in 1934 when the plane ANT-20 Maxim Gorky, the biggest one of that time, was constructed. The plane was supposed to to serve for agitation and propaganda. Under the wings of the gigantic plane escorted by the squadron of fighters and multicoloured parachutes one can see St.Peter and Paul Fortress and the Neva, the Spit of Vasilyevsky island and the Admiralty, the Winter Palace and Palace Square (called at that time Uritsky Square). Kuptsov was a spiritual disciple of Pavel Filonov and an keen propagandist of his analytical art. In a peculiar way the painting represents the Filonov’s conception of growing of the form that suggests that from small parts designed like a mosaic the majestic panorama of St. Petersburg – Leningrad appears.