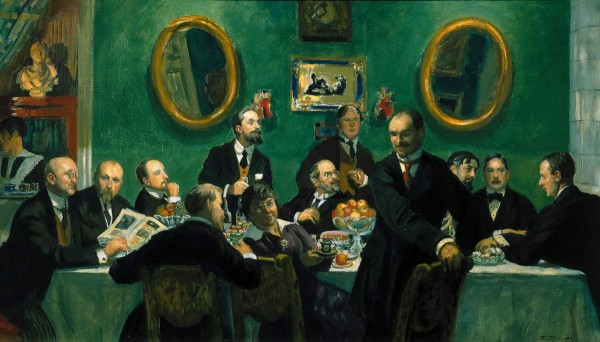 Group Portrait of the Members of the World of Art. 1916–20. Modello for an unpainted picture

Depicts (from left to right): Igor Grabar (1871–1960), Nicholas Roerich (1874–1947), Yevgeny Lanceray (1875–1946), Ivan Bilibin (1876– 1942), Alexander Benois (1870–1960), Georgy Narbut (1886–1920), Nikolai Milioti (1874– 1962), Konstantin Somov (1869–1939), Mstislav Dobuzhinsky (1875–1957), Kuzma Petrov-Vodkin (1878–1939), Anna Ostroumova-Lebedeva (1871–1955) and Boris Kustodiev (1878–1927).
In 1910, on behalf of the Tretyakov Gallery, Igor Grabar invited Boris Kustodiev to paint a group portrait of the members of the World of Art. Himself a frequent contributor to the World of Art exhibitions, Kustodiev willingly agreed and began work at the first opportunity. Between 1913 and 1916, he painted a series of personal portraits from life in mixed media. Almost all the artist’s compositional versions were later employed in this modello of the intended large group portrait, which was in fact never painted. Kustodiev depicts the artists sitting round a table laid for tea in Mstislav Dobuzhinsky’s drawing room. Engaged in friendly discussion, the figures are portrayed in a series of diverse movements, gestures and poses. The intended genre interpretation was both unusual for a group portrait and compositionally daunting. The artist’s study evoked all sorts of surmises and conjectures regarding the relationships between the sitters and the state of the World of Art at that time.