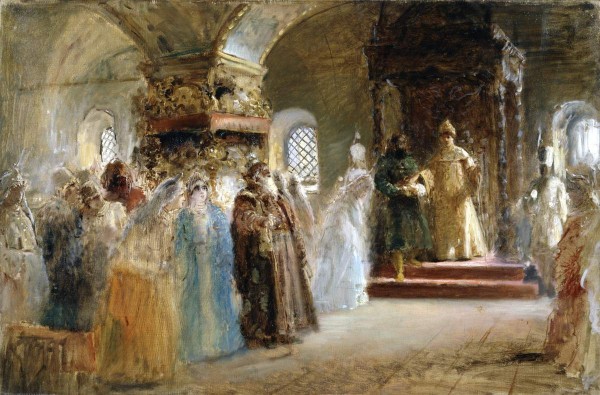 The first wedding of the young Tsar Alexis Mikhailovich was preceded by the traditional preparations. A total of 200 maidens from boyar and noble families were brought to Moscow from all corners of the land, and the six prettiest were then chosen to be shown to the Tsar. At the ceremony of viewing the Tsar was attracted to Euphemia Vsevolozhskaya, the daughter of a landowner from the town of Kasimov, and as a sign of their engagement the Tsar offered the girl a ring and a scarf. Rumours circulated that the hairdresser had been bribed by Boris Morozov, a boyar, and had made her hair so tight that she fell unconscious in front of her bridegroom. With the help of a doctor, who had also been bribed, this was then diagnosed as epilepsy. The marriage fell through, and Alexis soon married Maria Miloslavskaya, the daughter of a boyar. Morozov married Miloslavskaya’s sister, thereby gaining great power at court. Konstantin Makovsky shows us the culminating moment in the colourful ceremony when, as he looks at Euphemia Vsevolozhskaya bowing slightly before him, the young Tsar prepares to make his choice.