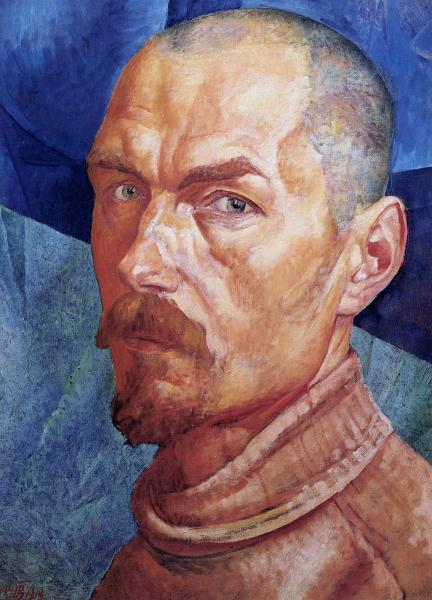 Self-Portrait was painted in 1918 – the year of the still-life in the oeuvre of Kuzma Petrov-Vodkin. The artist’s letters to his mother of this period are full of reports of increases in the prices of bread and firewood; a chronicle of the destruction of the old way of life. Petrov-Vodkin’s close attention to the objective world appears to have been an attempt to record its collapsing contours and resist total dematerialisation. One of the few occasions when the artist addressed another genre in 1918, Self-Portrait reflects his tense reflections on the role of the artist in the apocalyptic period of revolution and his quest for stability deep within his own personality.
On 30 January 1918, Kuzma Petrov-Vodkin was elected a professor of the Academy of Arts. The artist greeted this news with mixed feelings: “Honourable and flattering as it is, it is with great hesitations that I accept this enormous task. Were it not for the difficult times for Russia and the danger that art will wither away amid the general destruction ... I do not have the right to reject the possibility of at least attempting to improve our high school.” The artist’s sense of responsibility was linked to his dreams of building a new art for a new Russia based on his own artistic and philosophical principles. This stance dictates the iconnic formula of his self-portrait. In keeping with Kuzma Petrov-Vodkin’s own concept of a new “planetary” vision, his austere face arises out of the intersecting “planetary” planes of heaven and earth, forming the shape of a cross.
«Виртуальный Русский музей» в социальных сетях: