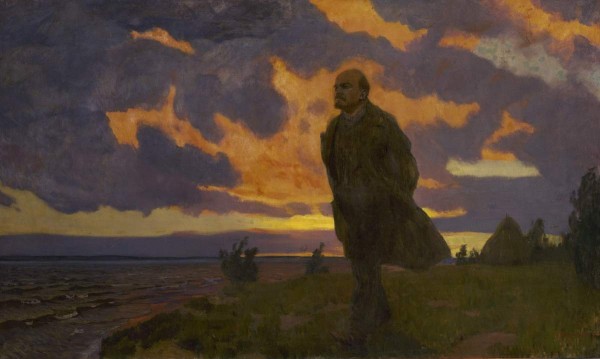 Vladimir Lenin in Razliv in 1917

Variant of the painting Vladimir Lenin in Razliv (1934, Tretyakov Gallery). 1934

To embody the oft-depicted “Lenin in Razliv” theme Rylov chose a composition that was reticent but filled with romantic pathos: Lenin is shown walking along the shores of the Gulf of Finland with a high and restless sky in the background. The colouristic tension reflects the enormity of the problems on which the leader was meditating in his solitude outside the city. Here he completed one of his fundamental works, The State and Revolution, which formulated the role of violent revolution in the “reeducation of the masses” as well as addressing the specific question of an armed uprising to overthrow the Provisional Government.