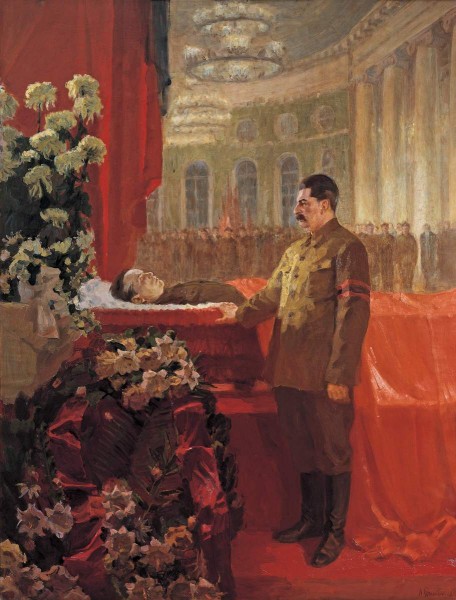 In 1934 Rutkovsky headed a team of artists engaged in decorating the Beloostrov train station, the opening of which on 4 December was to be attended by Kirov, who followed the artists’ progress with interest, even helping them obtain hard-to-get paints for their work. However, Kirov was murdered in the halls of Smolny on 1 December. Many Soviet artists reacted with sadness to his death. In this hastily created painting Rutkovsky depicted the myth of the Soviet head of state’s leave-taking with the deceased. It’s unlikely that the artist knew of the rumors that soon appeared regarding possible political motives behind Kirov’s murder. He simply expressed a feeling of solemn grief, underscoring the great significance of the event. Pure red in contrast with white and black defines the somber resonance of this painting built on a strict rhythm of horizontals and verticals. The canvas is both a document of its age and a typical Socialist Realist work in which myth is transformed into reality through artistic mastery.