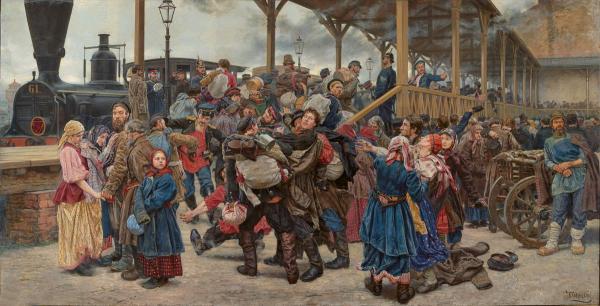 Konstantin Savitsky's epic paintings of dramatic events from the lives of the peasantry were renowned for their emotional tension and psychological depth. To War is one of the best known pictures of this master of complex, multi-figured compositions. Savitsky spent almost ten years working on this monumental canvas, which was inspired by the events of the Russo-Turkish War (1877–1878). Depicting the dispatching of a troop train, this scene is interpreted as a national sorrow. The master attempts to capture the general mood of hopelessness, showing the feelings of the soldiers and their relatives. The crowd consists of several small groups, each one expressing the states of mind of the characters in a different way. There is no single centre or dominant group; everything is mutually connected and subordinated to the main idea. The artist conveys a broad range of human emotions, from the despairing woman parting with her husband to the silent grief of the old woman clinging to her son's breast. The psychological image of the elderly peasant surrounded by his family is particularly profound. A young soldier turns to his wife in confusion. The sharp contrasts of blue and red and the cold colour scheme increase the impression of alarm and worry. This picture was widely acclaimed by contemporaries.