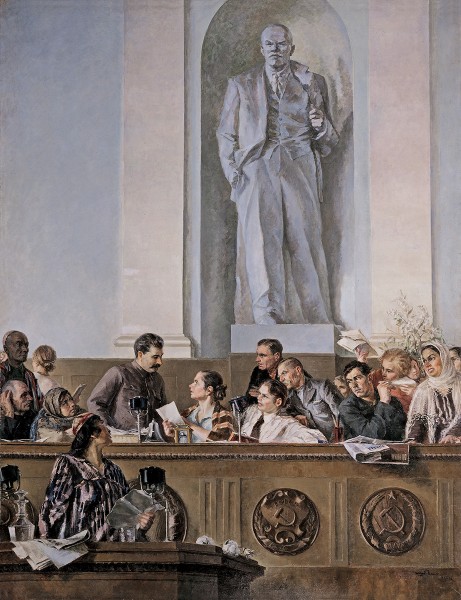 Leader, Teacher and Friend (Joseph Stalin at the Presidium of the Second Congress of Collective Farm Shock Workers in February 1935)

The painting was exhibited for the first time at the grandiose Industry of Socialism exhibition held concurrently with the 18th Bolshevik Party Congress. The event it depicts is the Second Congress of Collective Farm Shock Workers of February 1935, which ratified the Rules of the Agricultural Artel and proclaimed “socialism’s complete victory in the countryside”. The artist depicted a real episode that took place at that congress, as reported by the press: Stalin visits as one among equals with ordinary collective farm worker Ev do kia Fedotova, head of the machine and tractor station at the Renewal Collective Farm in Lenin grad Region. Fedotova, also immortalized in a portrait by Sofya Dymshits-Tolstaya (illus. 14), chaired the session on that day. On the rostrum is the cotton shock worker Tashlanova from Uzbekistan. Her figure in colourful national attire, along with those of a young Turkmen woman in a white scarf and Uzbek party leader Aga Yusup Aliev, which frame the composition, are the artist’s tribute to a favourite theme: Shegal worked much and with great enthusiasm during field trips to the Soviet Union’s Central Asian republics, and in this way he enriched his painting’s subject with the theme of friendship among nations. The prominence of female images in the work is also no accident, as female agricultural shock workers made up a record number of the congress’ delegates. Thus the artist documents the country’s progress on the path to women’s equality. Critics noted a certain monotony in the treatment of the composition’s upper region, which is occupied by a flat wall. Yet it is here that we find a sculptural image of Vladimir Lenin looming over the events occurring below. This element of the hall’s interior allowed the artist to denote the Soviet state founder’s unseen presence at the congress using realistic means. Lenin’s dominant place in this large-scale painting prompted contemporaries to speculate on the distribution of roles in the triune formula “Leader".