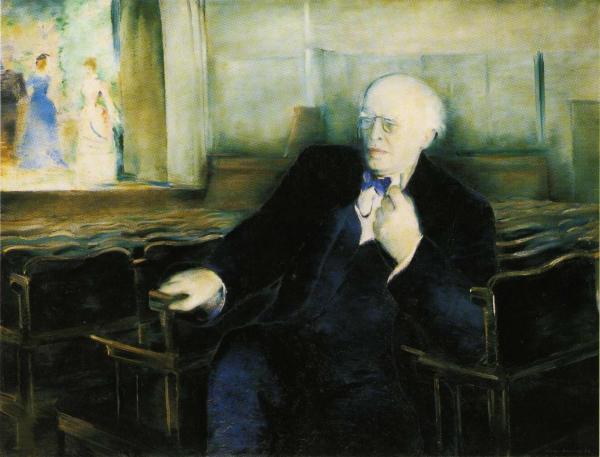 Konstantin Sergeyevich Stanislavsky (Alexeyev) (1863–1938): Director, actor, teacher, acting theorist, founder of the Moscow Arts Theatre (1898). People’s Artist of the USSR (1936).
A graduate of the VKhUTEMAS, Pyotr Williams was invited to work at the Small Stage and Opera Studio of the Moscow Arts Theatre in the late 1920s. From 1930 to 1934, he designed the sets and costumes for various shows staged by Konstantin Stanislavsky. The director liked his audacious designs and invited the artist to collaborate on his last great theatrical experiment – Molière’s Tartuffe (1938). In the process of designing the sets, Williams attended rehearsals and became acquainted with the work of the actors and directors. Easel portraits helped him to enter the artistic image and the characters of the dramatis personae, and he portrayed many actors of the Moscow Arts Theatre. This particular work was inspired by the artist’s contacts with the famous director, whose image seems detached from the stage. Williams depicts the run-through of a show – the first full rehearsal of a play in the order of the scenes – when the main work is done and all that remains to be added is the finishing touches. The heroes on stage are performing Anton Chekhov’s The Seagull, a play for which the Moscow Arts Theatre was particularly famed.
«Виртуальный Русский музей» в социальных сетях: