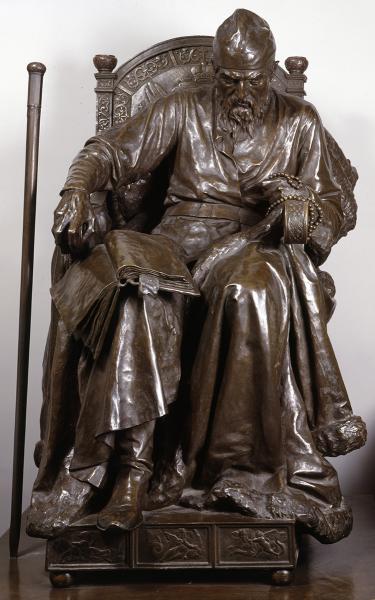 Antokolsky sculpted one of his most notable work at the beginning of the 1870s. This sculpture represented the pinnacle of Antokolsky’s work and brought him fame. Through the figure of Ivan the Terrible, the sculptor aimed to capture the essence of these tragic conflicts, which characterized the difficult and hard times under the Russian ruler. The major innovation of this representation and the vivid realism of this display come from the fact that the main priority was given to the psychological traits of this “tyrant and martyr”. It is not only the terrible suffering of his conscience that defines his inner state. His growing rage, his hunger for revenge, his anger and his tremendous mental strength also define it. All these things are depicted on the face of the first  Russian Tsar, in the movement of his hands poking his staff and in the union of elements that cannot be combined as: his necrology and his throne and his monastic dress and his furious rage. This enclosed composition and its asymmetrical elements show his concentration and his internal struggle. This sculpture opened a new page for the easel art, in which were presented “the first living man and the first living feeling” according to the art critic Vasily Stasov. It is interesting that the professors at the Academy of Arts refused to examine it as they regarded the sculpture to be “far from the conventional canons”. However, the sculpture made a strong impression to Alexander II and Grand Duchess Maria Nikolaevna, who patronized the Academy. The Emperor even ordered a bronze version of this statue. In 1872 the sculpture of the academician Antokolsky was shown to the International Exhibition in London and the Kensington Museum ordered a copy in plaster for its collection. “Ivan the Terrible” was the first work of a Russian master, which was acquired for the collection of a foreign museum.

Other versions of this sculpture exist: in plaster in the Kensington Museum in London; in marble in Tretyakov Gallery; in bronze in the State Museum of the History of Religion. It was also created in small-scale: in marble in the Art Museum of Irkutsk; in terracotta in the Museum of History of Uzbek Soviet Socialist Republic; in tinted plaster in the Nikolaevsky Art Museum. Antokolsky received the title of academician in 1871 for this sculpture.