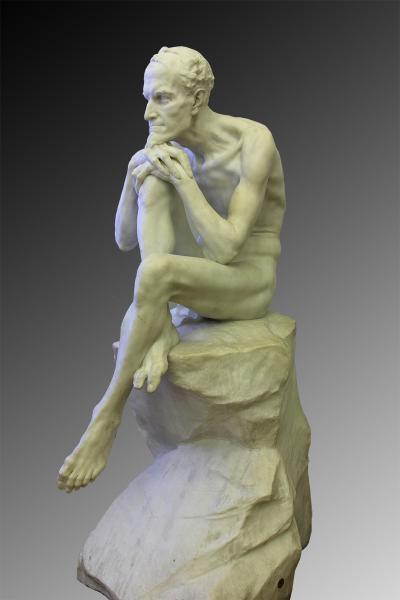 Mephistopheles, which was called before “the 19th Century”, is not only the incarnation of the universal evil, but also embodies the lingering doubt and the impiety. The angular and sharp forms, as well as the sarcasm of its face, give the sculpture a unique expressiveness.

The sculptor used Goethe’s poem “Faust” as a basis to materialise Mephistopheles, and almost created an illustration in his initial sketch, but the “literariness” of the subject did not content the sculptor. Gradually, a new understanding of Mephistopheles’ character revealed itself to the sculptor. The sculptor wrote: “Mephistopheles represents the unquenchable rage, the endless anger, ruthless and abominable, it can reside in a sick body with a corrupted soul. He is sick and suffers from the fact that he has survived everything   and has been ruined and cannot live any longer and enjoy life like the others around him. His spirit is powerless”.  For the sculptor, Mephistopheles personifies the generation of his contemporaries: he is the symbol of the 19th century. The sculptor created many versions of this statue, in an effort to use most of the artistic resources, without resorting to explain details, in order to represent Mephistopheles. Having sculpted him naked, Antokolsky avoided necessity of depicting a costume of any historical time. The artist conserved the literary name for his statue. Antokolsky explained this fact that it helped to make the image more understandable to the people. As he finished the statue in 1883, Antokolsky dreamt of displaying it in St. Petersburg. After long correspondence, and endless efforts of Vasily Stasov, it was displayed in 1886 in the Hermitage. The sculpture  was a resounding success everywhere. The Berlin Academy of Arts elected Antokolsky as an honorary member.  The sculptor was awarded the Grand Prize (Great gold medal) in Vienna.