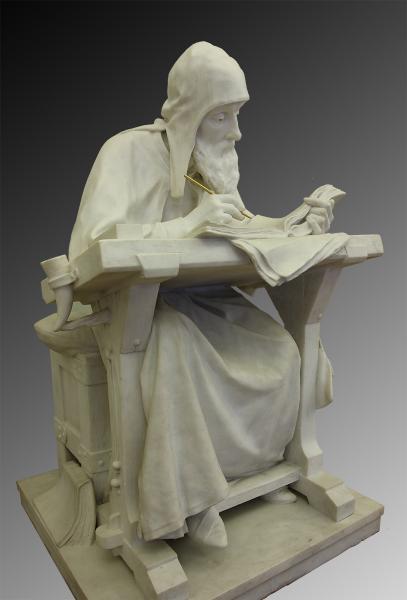 In order to sculpt Nestor, Antokolsky wanted to depict a man withdrawn from the vanity of the world, lost in his own bright mind and inward peace. The chronicler is sitting at a simple desk in a natural and spontaneous posture as he slightly bends his back and inclines his head. He seems concentrated and pensive as his eyes are sad. The flawless mastering of the marble, the strong play of light and shadow on Nestor’s face and clothes bring lifelikeness to the statue. The light reflects off the sleek surface of the wooden desk, enlightens Nestor’s face and hands. Where the sculptor reproduced Nestor’s wrinkled face skin, the light is disrupted by the shadows of these cavities, as if it was absorbed by the matt surface of the marble.

Nestor, who lived during the 11th-12th century, was an Old Russian writer and chronicler. He was a monk at the Kiev Caves Monastery. Nestor wrote about the lives of Boris and Gleb and Theodosius of the Kiev Caves. He is traditionally considered as one of the leading historians of the Middle Ages as he is the author of the first edition of "Tale of Past Years".