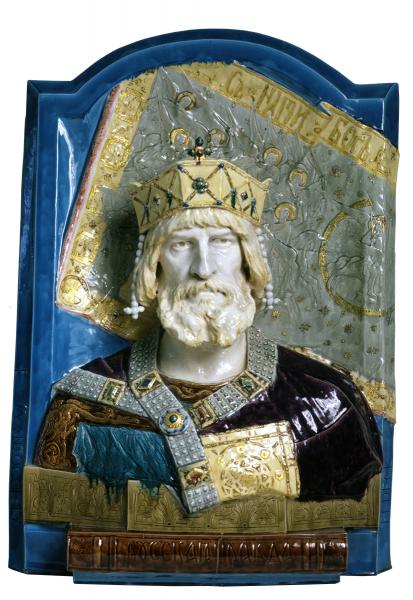 Antokolsky began to work on Yaroslav the Wise sculpture in 1888. The high relief was moulded in majolica the next year by the famous French firm «H DECK». The Grand Prince is depicted with a war banner behind him and wears a princely crown and elegant crimson clothing. The code of laws of the Kievan Rus, "The Russkaya Pravda" (Russian Justice) is placed at the base of the high relief. It marks one of the important deeds of the prince.

Grand Prince Yaroslav (the Wise) (around the years 978–1054), was the son of Vladimir Sviatoslav and Rogneda of Polotsk. He was the father, the grandfather and the uncle of many European leaders. Yaroslav was prince of Rostov (987–1010), of Novgorod (1010–1034), and Grand Prince of Kiev (1016–1018, 1019–1054). Yaroslav the Wise led the Kievan Rus into a golden age. During his reign, Kiev could rival with Constantinople’s splendour and greatness. In the Russian history, Yaroslav’s ruling is decisive, mainly because of his work on the development of the Kievan Rus, which was focused on the education and the Christianisation of his people. Under Yaroslav’s reign, the Cathedrals of St. Sophia of Kiev and Novgorod were built in stone, as well as the first monasteries. The first school also appeared at that time. St. Sophia Cathedral of Kiev housed a magnificent princely library. As far as foreign policy is concerned, Yaroslav strengthened the international authority of the Kievan Rus. Because he created the first old Russian law, the "Russian truth", Yaroslavl is considered to be a legislator.