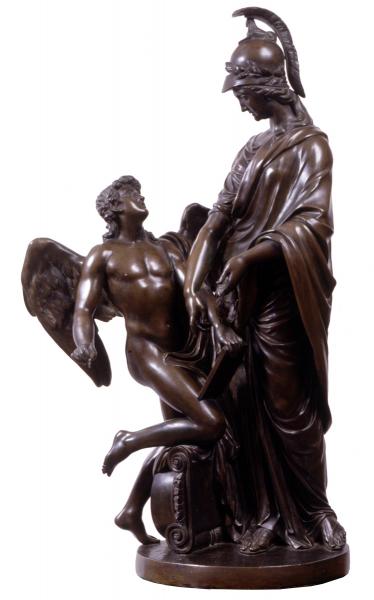 Minerva and Genius of Arts

The sculpture is located in the New Hallway of the Stroganov Palace. On the order of empress, depicted in the similitude of goddess of wisdom Minerva, the winged Genius is going to put down the names of those, who are worthy to receive a laurel from her. The Stroganovs patronized the artists, and “the Minerva theme” in their house was quite notable. That is why this group serves as a certain motto for the central exhibition of Stroganov Palace.

Minerva is one of the main goddesses of ancient world, corresponding to Greek Pallas Athena – goddess of war, wisdom, sciences and crafts. The Etruscans, who saw her as a violent goddess of mountains and valuable discoveries and creations, especially glorified her. In ancient Rome Minerva was considered bellicose and violent, as assumed from the gladiatorial plays, organized in her honor.