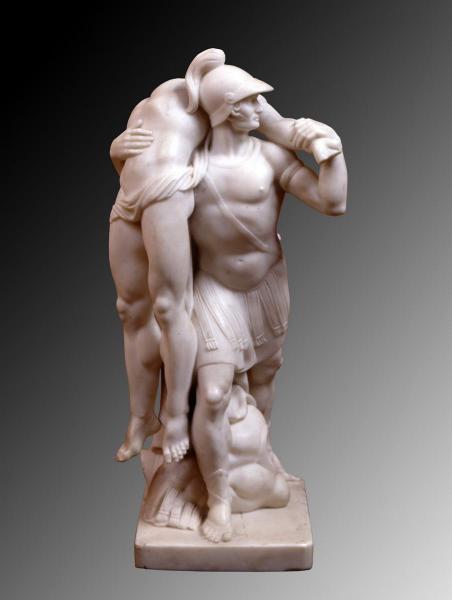 Ajax protecting the body of Patroclus

The small sculptural group, which was based on one of the stories in the series of epic poems about the Trojan War, shows the features of monumentality.  The classicist sculptor is interested in the heroic theme, and he makes several pieces based on the Iliad. The dramatic idea of the sculpture unfolds by the emphasized contrast between the lifeless body of Patroclus and the powerful figure of Ajax, full of determined effort. Kozlovsky created the image of a dead hero by showing his limply lowered head and heavy extended body. Next to this image, the power and passion of Ajax, presented in a quick and energetic outburst, becomes especially impressive.

Ajax and Patroclus are the heroes of the Trojan War and Homer's poem "Iliad". The plot depicted in the composition is connected with the death of Patroclus from the hands of Hector, followed by the recapturing the body of Patroclus and taking it back to their camp by the Achaeans, led by Menelaus and Ajax.