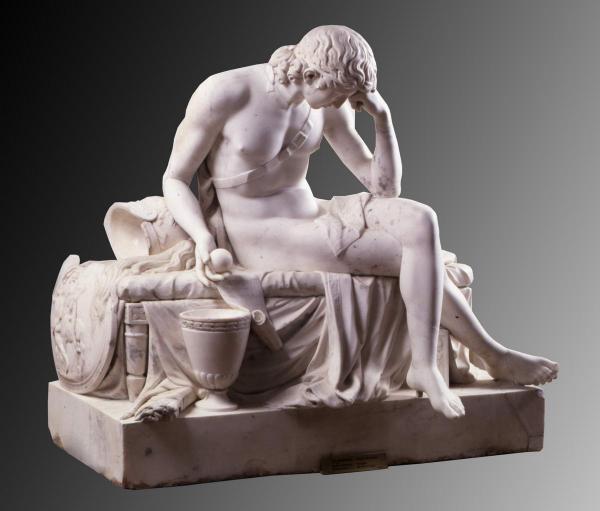 The Vigil of Alexander the Great

The sculptor took the image of the ancient hero as the embodiment of moral ideals which were worked out by the thought of the Enlightenment of the 18th century: Kozlovsky depicted the education of Alexander's firm will, which helps him to resist sleep. At the same time, the sculptor glorified the love of this hero for enlightenment: the scroll of the Iliad near him is an evidence of taste and education. The original plot motif, chosen by the sculptor, fully corresponded to the moralizing tendencies that were developing in his work during the 1780s. Creating a statue, Kozlovsky shows a powerful figure of a resting warrior, full of vitality. Its majestic peace is imbued with an inner readiness for rapid movement. This work is a very distinct example of the artistic thinking of Kozlovsky, whom his contemporaries compared with the great Michelangelo.

The compositional balance of the volumes, rhythmic completeness and thoughtfulness of each line is felt in the sculpture. In general, the sculpture was designed for a frontal viewpoint, which characterizes the gradual adoption of the aesthetic system of classicism in the Russian sculpture. Even decorative effects in the arrangement of attributes and draperies do not overshadow that sense of severity and restraint of the plastic feeling that distinguishes the marble figure of Alexander the Great.

Alexander of Macedon (356-323 BC) – a king of Macedonia (from 336 BC), an outstanding commander. Born in the family of the Macedonian king Philip II, he was brought up in the Spartan spirit, and the ancient Greek philosopher Aristotle was engaged in his education. At the age of 16 the boy joined the military. After the death of his father, he led the Hellenistic army of the Greek states against the barbarians. As a result of crushing victories he captured Persia and many cities in the Mediterranean and Egypt. He created a huge empire, which disintegrated after the death of the 33-year-old commander.