Painter, icon painter, decorator, portraitist. Son of a Moscow priest, brother of Ivan Nikitin, father of architect Pyotr Nikitin. Together with his brother, he went to Italy as a fellow of Peter the Great, where he studied under Tommaso Redi in Florence (1716‒1719). In 1719 he moved to Paris and to study under Nicolas de Largilliere, and returned to Russia in 1720. Helped to design the Triumphal Gates in Moscow celebrating the victory over Sweden in the Great Northern War. Married Maremiana Petrovna, widow of the artist Maxim Birovsky (1725). Arrested (1731), released (1731) and rearrested (1732) in connection with the libelling of Archbishop Feofan Prokopovich. Exiled to Tobolsk with his wife (1737). Released by Empress Elizabeth Petrovna (1742). Returned to Moscow (1742). Painted icons for the St John Chrysostom Monastery and helped to restore the Triumphal Gates opposite the Annenhof Palace in Moscow. Had his school of painting. 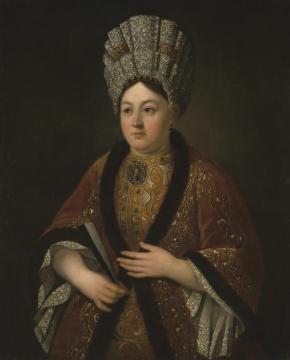