Artist. Author of historical compositions, portraits. The son of a Cossack Ignaty Vasilyevich Lapa. Studied in Korsun under the artist S.V. Perevolotsky, then in the White Church under the artist Y.Y. Nikitin. From 1822 to 1829 studied at the Academy of Arts as a foreign student under the tutelage of A. I. Ivanov, lived in dependence on the count M.S. Vorontsov and under the patronage of the Society for Encouragement of Artists. In 1826 he received the second silver medal for drawings from life. In 1829 presented to the Council of Academy the painting "Featuring the Kiev Citizen, Who Told Pretich the News about the Pechenegs Sieging Kiev" (Tretyakov Gallery). The Council decided to award the author with the first gold medal at the expense of the Society for Encouragement of Artists. In 1830, together with A. A. Ivanov went to Rome as a scholar of M.S. Vorontsov, executed copies of works by Italian artists. In 1834 almost lost his sight. In 1839 he exhibited in Rome the painting "Featuring a Woman Carrying a Basket on Her Head with an Unfinished Left Arm" acquired by the crown prince Alexander Nikolaevich. In the same year married the model Vittoria Caldoni, with whom he returned home. Lived in Kiev, since the middle of the 1840s in the village Moshny of Kiev province. In 1842 for the painting "Susanna Caught by the Elders" received the title of academician. In 1850 moved to Cherkassy, in 1866 – to the town of Mozyr, Minsk province. In 1869 he moved to live with his son in the town Dinaburg of Vyatka province. In 1872 (1871?) in connection with the transfer of his son moved to St. Petersburg. 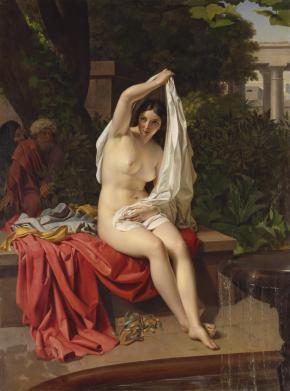