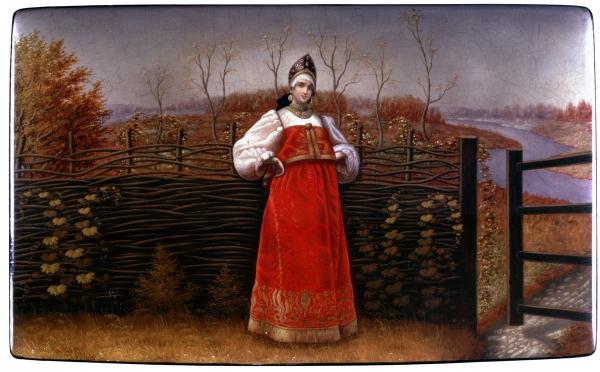 Boyarishnya (Unmarried daughter of a boyar). A casket

Boyarishnya is unmarried daughter of a boyar.

At the very end of the 18th century in the Danilkovo village near Moscow merchant I.P. Korobov founded a factory for producing works from papier mâché. His son in law inherited the factory in 1818. He and his descendants improved production and created the new craft of lacquer miniature painting during the 19th - beginning of the 20th century.

Diverse in forms and fashionable in those times snuffboxes, caskets, boxes, cigarette cases, glasses cases, stamp cases and little purses were made from papier mâché. They were covered by lacquer against a black background and then the miniature compositions were painted in oils. The craftsmen used as originals paintings and graphic art by Russian and European artists. The craftsmen simplified the originals in their works, changed the composition, limited the number of characters, and omitted a number of details. They decorated the box in order to create a piece in which the painting combined organically with the box’s shape and proportions. The lacquer surface was sometimes inlaid by mother of pearl or laid with leaves of foil or gold. The subjects of painting were landscapes, portraits, views of towns, scenes from folk life or ornamented compositions.