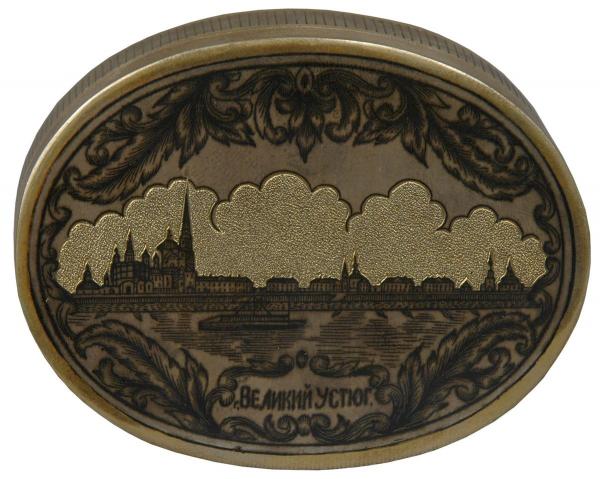 A native of Veliky Ustyug, E.Shilnikovsky was educated at the Petersburg Academy of Arts in the studio of the famous engraver Vasily Mate. After his returning to Ustyug, Shilnikovsky was carried away by the art of niello and from 1936 to 1962 he was the artistic director of the Northern Niello. For many years, the products of the factory were made by his sketches. In 1937, works from Veliky Ustyug were successfully exhibited at the International Exposition of Art and Technology in Modern Life in Paris.

Deep study of the features of the old niello art helped to E. Shilnikovsky in creating new ornamental and visual compositions. So in his works there were traditional city landscapes; jubilee cups, glass-holders and bracelets were decorated with views of the Moscow Kremlin and Red Square. On the cover of a small oval powder box the craftsman painted a panorama of Veliky Ustyug. The niello silhouette of the embankment with tall domes of churches and bell towers stands out clearly on the specially prepared background, outlined by a wavy line of clouds. The landscape is framed by branches with softly curved leaves. In this work, as in many others, the craftsman develops the pictorial techniques of the niello, which the 18th century Ustiug art was famous for.