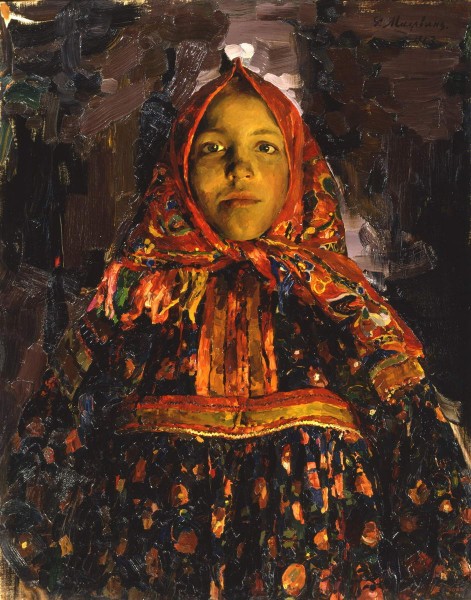 On the eve of the twentieth century, when he was still a student of the Imperial Academy of Arts, Philipp Malyavin introduced a new type of peasant woman to Russian art – proud, majestic, audacious and independent. The artist’s heroines lived in the villages of Ryazan Province and wore bright and colourful attire. Verka, however, is unlike the images of her fellow villagers, reflecting another type of character. The startled girl poses with a dumb-founded expression in her gaping eyes. Concealing her figure behind a mass of motley clothes, Verka is touchingly shy and bashful. She is almost like an animated idol. One can nevertheless sense her integrity, inner strength and feeling of her own virtue. Philipp Malyavin’s portrait is built on the contrasts between the girl’s balanced and calm character, the vibrations of the light and colour in her clothes, the meticulously painted tan on her bronze-brown face, the static posture, the golden-green mirage in the background and the shining red, blue and green tones of the dress and headscarf. The clear composition, distinct silhouette, low horizon and thick and temperamental brushstrokes monumentalise the image.