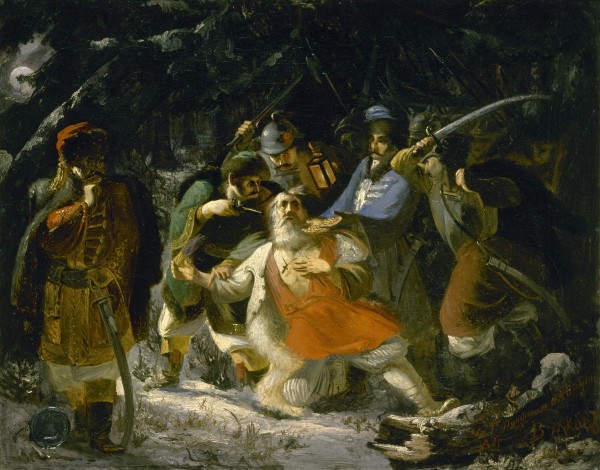 Study for the painting of the same name (1855; whereabouts unknown)
Several versions exist of the heroic act of Ivan Susanin, who saved Michael Romanov after the latter had been elected Tsar by the Zemsky Sobor in February 1613. Michael was not actually present at the assembly since as early as August and September 1612 he had been ejected from the Kremlin by the Poles and had left with his mother for his ancestral lands in the village of Domnino, near Kostroma. Tradition has it that on 8 March 1613 the Poles tried to seize the young Tsar, and to this end sent a detachment to Domnino, where Ivan Susanin, a peasant and the village headman, offered them his services. The Poles believed him, but he led their detachment into an impassable swamp. After Susanin refused to show them the real way to the place where Michael Romanov was hiding (the young Tsar had taken refuge in the Ipatyev Monastery) he was tortured and then killed savagely. With an expressiveness that is typical for studies, Adrian Volkov shows the moment when the enemy, enraged at Susanin’s stubbornness, inflict the fatal wounds. The subject was very popular in the 19th century and formed the basis of the famous opera A Life for the Tsar (or Ivan Susanin) by Mikhail Glinka.