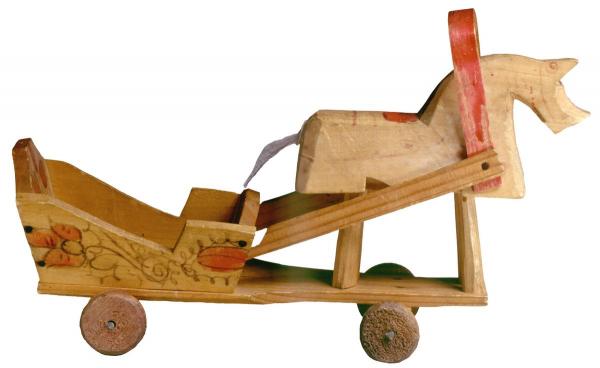 "Horse in harness". A Toy

In the Semenovsky District, on the basis of the folk crafts a centre of a wooden toy appeared in the village of Fedoseevo at the end of 19th century. The style of the Fedoseevo toy painting was formed under the initial influence of the style of the painted Semenovo spoon. Its peculiarity is the yellow background covered with the linseed oil, on which scarlet flowers with green leaves or images of human figures, animals, birds, are drawn. The pictures are reminiscent of children's drawings. There are two main types of toys in Fedoseevo: cut by and ax (In Russian toporschina, from the word an ax) and balyasy (amuseuments). The pieces are made  from the cut boards and splinters.The shapes of the objects are square or rectangular with straight or sloping walls. The furniture for dolls, steamers, locomotives, tram carriages, sledges and carts, balalaikas, mills with rotating wings, carousels with squeaky music were also made in Fedoseevo. Rigid constructive forms of toys are softened by painting, which conceals their sharp corners.