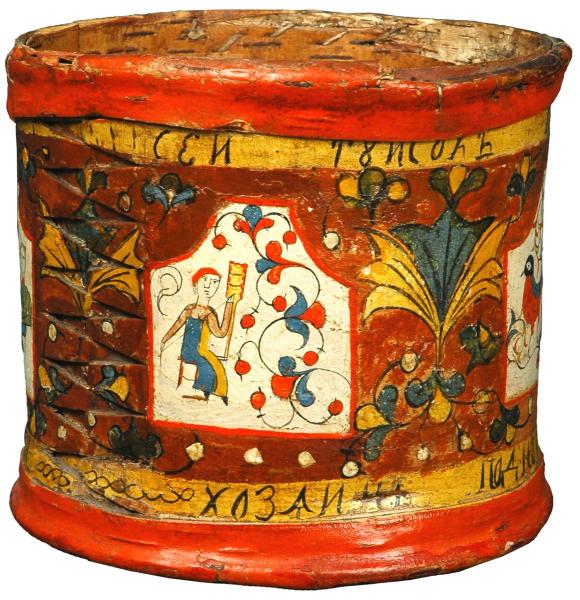 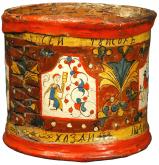 Tues is a small box with a lid made from birch bark used for storage of different products.

Permogorie is a large centre of painted crockery and utensils on the Nothern Dvina River. Already in the 18th century the local craftsmen painted trunks and cradles, tues and baskets, ladles with two handles, breadbaskets and later also distaffs. The Sirin fairy-tale birds, deer, horses and unicorns are pictured together with real hens and cocks, cats and dogs, with the scenes of tea drinking at the samovar, spinning in the splendid rooms where the characters are the villagers in ordinary clothes. The craftsmen use only four paints – uniting yellow and green with the black outlines on  the white background creates the whole atmosphere.

The Permogorskaya painting is acknowledged to be the most developed in view of the range of objects, content and diversity of pattern forms. Its decorative style was strongly influenced by Veliky Ustug enamel, niello on silver, carving on birch bark, as well as Solvychegodsk enamel and patterns of precious cloths and gold embroidery. The painting of Permogorie comprise all the magnificence and luxury of so called “grass baroque”.

The masters of Permogorie sometimes made funny inscriptions on their pieces. On this tues one can read: “This tuesok is for drinking kvass with a feather, the host, please, offer and the guest, do not ask for more”.