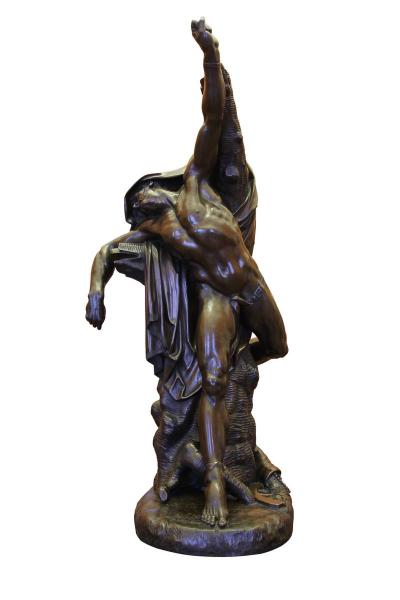 The plot was taken from the history of Ancient Greece. The depiction of death of a hero through crucifixion by his enemies became one of the significant works of the artist. For the 18th century people Polycrates was not only the symbol of the changeable happiness, but also an example of a greedy tyrant, who was ruthless towards his subjects, terrible to his enemies, had no sense of boundaries in vanity. In Kozlovsky’s mind the theme of the death of a tyrant came up in Paris during the revolution. The sculptor used it as an allegorical answer to the contemporary events. The burning desire for freedom, the feeling of suffering and aching fatality took shape in the sculpture and depicted the sharpening and intense struggle, which were imbued in the European society during that time. There is a Greek inscription on the statue, which says: “No one is happy, until alive”. These words, which the Greek historian Herodotus put in the mouth of king Croesus, who was burnt, can be the epigraph to the artistic image, created by Kozlovsky.

Polycrates (date of birth is unknown — 522 BC) was a Greek king of the island town Samos, a tyrant, who ruled from 538 BC to 522 BC. He was known by his massive construction and maritime piracy. He had distinct energy, militancy and love for the luxury. He patronized the scholars and artists, Anacreon and Pythagoras were living at his court. The Persian satrap Oroetus viciously killed him.