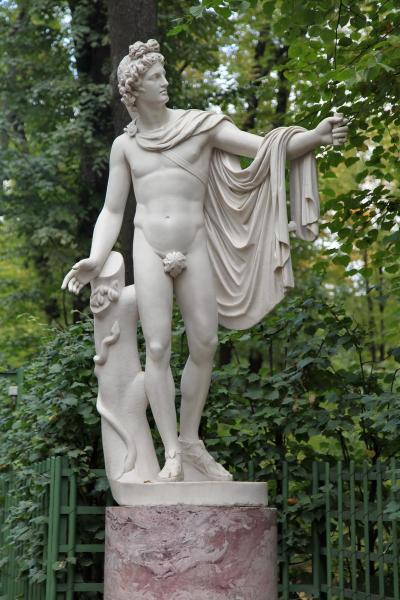 The Apollo Belvedere is a celebrated marble sculpture, a Roman copy of a non-preserved bronze original by the ancient Greek sculptor Leochares (a court sculptor of Alexander the Great, around 330–320 BC). The statue features the god of sun and light, the son of Zeus and goddess Letoand the twin brother of Artemis as a handsome young man shooting a bow. The marble statue was found between 1484 and 1492 in Nero’s villa in Antium near Rome (modern Anzio, Italy). In 1506, during the reign of Pope Julius II, the sculpture was mounted in an antiquary in the Belvedere Garden in Vatican, which gave the statue its name. The copy from the ancient Apollo Belvedere statue and its pair statue “Diane” (performed by P.Triscorni’s workshop around 1800) were mounted in the central porch niche of St. Michael’s Castle during its construction (around 1800). In 1830 the sculptural decoration of the castle was demounted and the statues stood in the Summer Garden for a long time. In the period of 2009–2011 these original sculptures were fully renovated and replaced to the Engineers' Castle (St. Michael’s Castle) in Saint Petersburg for permanent museum preservation. Since 2012 their exact copies made of marezzo marble are situated in the Summer Garden