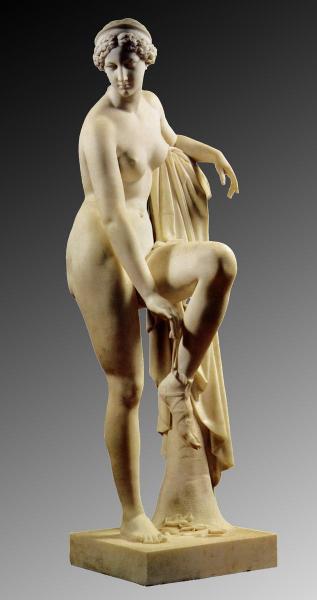 Vitali’s works attract with their warmth and sincerity. In a rhythmically refined statue of Venus the influence of fresh romantic combination of living nature and classical examples of ancient art can be seen.

Venus (Latin “love”) – in Roman mythology initially was a goddess of gardens abloom, spring, fertility, growth and florescence of all natural vital powers, a goddess of love and beauty, patroness of marriage, mother of Cupid (Eros). When tales about Aeneas spread in Rome the Roman Venus became associated with the Greek Aphrodite, mother of hero and goddess of love. Thus Venus became not only a goddess of beauty and love but also the ancestor of Aeneas’s descendants and consequently all Romans. In the art of the Italian Renaissance the beautiful and seductive Venus is the favourite of all the goddesses. In the history of fine art the image of Venus was gradually losing its religious and mythological significance and becoming an occasion to demonstrate the naked female body.